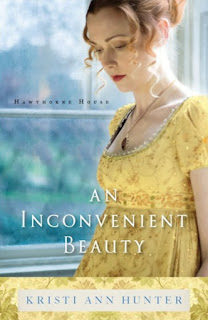 As all of Griffith and Isabella's expectations are shaken, Can they both set aside their pride and fear long enough to claim their own Happily ever after?

Hey Readers,
Here is my "Must Read"  for September and it is by one of my favorite authors Kristi Ann Hunter!

An Inconvenient Beauty by Kristi Ann Hunter is a Historical Fiction Romance set London England in 1815. I would recommend this book if you:

So here is the story,
An Inconvenient Beauty is the story of Griffith Hawthorne, The Duke of Riverton. He has decided that now is the best time to find himself a wife... Logically of course. He has watched the ladies of Society for about a year and he believes he has finally found the girl for him.  Miss Frederica St. Claire is perfect, she is popular but not in the "Diamonds" category. She is pretty but not drop dead gorgeous so he won't have fight off would be suitors and she seems to possess a sweet personality. The only problem? She does seem interested in Griffith. In fact, she seems to be avoiding him.

Isabella Breckenridge  (Frederica's cousin) should be enjoying her debut in society but she cannot because she has agreed to a bargain that will benefit her family if she is successful but has dashed all her romantic dreams as well as her conscience. Now it seems like her path keeps crossing with the Duke of Riverton and as she gets to know him better, she discovers that some people in Society were not what she expected and that just makes her feel worse about what she has been doing. She is torn between the deal with her Uncle  and the feelings she has for Griffith. but regardless of what she feels, She knows that their friendship can never grow into more, not with her Uncle's hidden agenda.

Griffith finds himself running into Frederica's cousin Isabella every time he tries to talk with Frederica . Annoyed that he may have been wrong about marrying Frederica, Griffith tries to avoid Isabella because she is the reason that he is second guessing himself, But unfortunately he finds himself  intrigued by Isabella and finds that she is always on his mind. Taking the advice of his sisters, Griffith tries to talk to and dance with Isabella but finds that she always disappears. Why does she keep avoiding him when it seems evident that she has feelings for him. Griffith is also confused because he does not know if he is in love with Isabella or if he interested in her because she is breathtakingly beautiful and is a puzzle that he cannot solve?
Praying that God will guide him, Griffith determines that Isabella is the one God sent for him to marry,
now he just has to convince her.

Will they ever be able to be honest with each other or will Isabella's secret pull them apart?


So what did I think?
First, this is the final book in the Hawthorne House series and though it is sad that such a great series has ended, I am glad that Griffith was finally the main character in a book. Though the book  is part of a series, It could also be read as a stand-alone.  The book overall was wonderful. I especially enjoyed  reading about the love you see between Griffith and his siblings, How they would do anything for each other and if any of them needed help, The others would all jump to help them.  I like that the Author included humor, wit, a bit of intrigue and some things that we struggle with in our day and age in her story. Overall , the entire series is on my "Must Read " list and this book is rated 5 out of 5 stars*****

I would like to thank Bethany House for allowing me to read and review this book in return for a free copy. I was not asked to write a favorable review, Just a honest one.

Believe on the Lord Jesus Christ and you will be saved!